Excessive flight path noise from planes arriving at and departing from Brisbane Airport is a massive problem affecting thousands of Brisbane residents – in particular after the completion of the New Parallel Runway. It’s abundantly clear that something needs to be done to reduce noise pollution for Brisbane residents and find a more sustainable way of managing Brisbane Airport. But for those not directly affected it’s also a very important insight into the power big corporations can wield over people’s lives and the legal system that allows them to do it.

Brisbane Airport Corporation (BAC) has produced a flight path design and operational model that maximises profit at the expense of Brisbane residents, small businesses and local schools, with no meaningful oversight from regulators or the Federal Government. Meanwhile, Airservices Australia, which is meant to act as an impartial regulator, appears to have completely rolled over for Brisbane Airport Corporation.

In fact, Brisbane Airport has one of the worst noise abatement plans in the developed world. Unlike Sydney Airport, it has no curfew and is currently run to maximise profit at the expense of Brisbane residents and the environment. Not only that, but BAC is completely exempt from state-level noise pollution laws – and in the medium term it’s clear we desperately need national legislation to regulate and mandate restrictions on aircraft noise.

Noise pollution from Brisbane Airport is affecting an increasing number of residents. Unfortunately the continued return of air traffic to pre-pandemic levels (and beyond) means that some previously sparingly used flight paths are now becoming busier. New flight paths have been in place since the opening of the second runway in 2020, but due to the effect of COVID on air travel, not all of these paths have been populated by flights. Now that air travel is gradually returning, more residents are now beginning to experience flight noise issues for the first time.

Brisbane Airport Corporation has an aggressive plan for growth over the coming years as it pursues its ambition to become a major freight airport for the eastern seaboard. According to analysis by the Brisbane Flight Path Community Alliance, BAC’s forecast air traffic exceeds 110 flight movements an hour by 2035, far exceeding air traffic from Sydney or Melbourne Airports, and bringing them on par with major international airports like Singapore or Hong Kong. If growth of this kind goes unchecked, it means that residents across the city will be affected more and more. For this reason my focus is on solutions that will benefit everyone, including a cap on flights and curfew. I will never support measures that just push the problem onto someone else.

After more than three years of denials and consultations and reports and reviews, we’re still not hearing anything much in the way of real progress from the Government on this issue.

As your MP, I’m supporting the community-led demands to curb flight noise, including:

Noise abatement mechanisms like these are already in place and providing relief for other communities near other airports across Australia, including at Sydney Airport. The Minister for Infrastructure has so far ruled out entertaining reasonable solutions like these. Apparently, a curfew or a cap on flights is good enough for Sydney residents, but not Brisbane.

In February 2022, Greens leader Adam Bandt introduced the Brisbane Airport Curfew and Demand Management Act 2022 to the Parliament, which would have introduced a curfew and cap on flights, and required a new long-term operating plan for the airport. You can watch Adam’s speech about this bill here.

These key demands from the Greens bill are all options available to the Minister now, and would make an immediate impact on this issue for residents affected by unsustainable flight noise.

Instead, residents are expected to put up with back-to-back flights coming in loud and low over their homes at any hour of the day, so that Brisbane Airport Corporation can reap the profits from becoming a major freight airport for the rest of Australia.

In the absence of Government support, we’re looking at how we can build community power to compel the Minister to take real action. I’ve been inspired by stories from how Sydney won their noise protections in the 1990s, after more than 10,000 people marched on Sydney Airport, creating pressure that the Government could not ignore.

Right now, BAC has the support of the Labor Party and the Coalition, the aviation industry, and Airservices Australia, which has been almost entirely captured by corporate interests. Just like in Sydney in the 1990s, this fight won’t just be won in parliament, but in the broader community as well.  In order to win real positive reform for Brisbane Airport the community has got to be prepared to call a protest action and get organised behind it. In 2022, following the disappointing review from Airservices into the new runway, and the Federal Government’s lack of commitment to serious noise reform for Brisbane, I convened a strategy meeting of over 200 residents in Bulimba to determine our path forward. 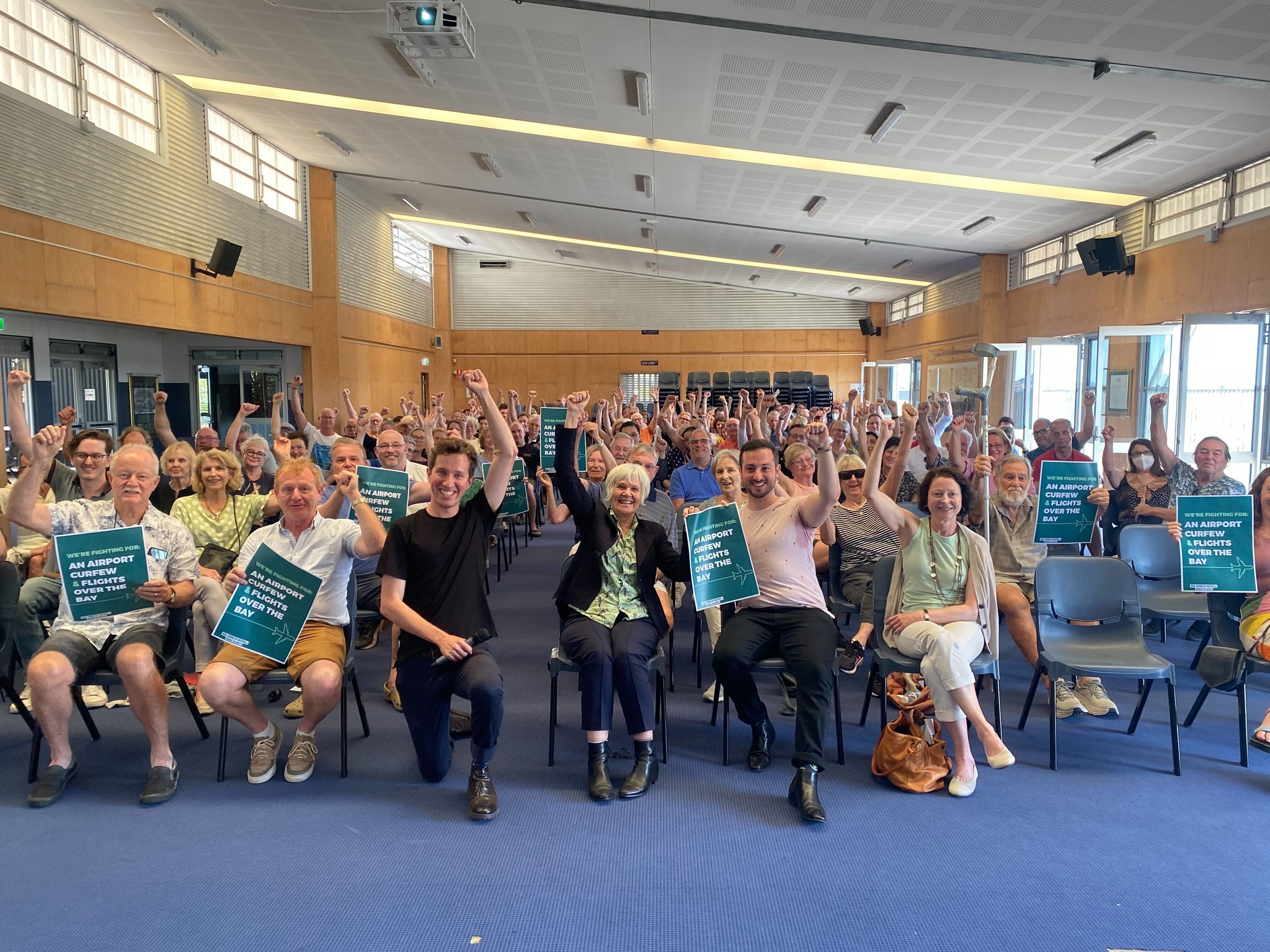 The key outcomes from this meeting was broad agreement that:

We are building momentum, to culminate in a major protest action to be agreed with community members in 2023, followed by the reintroduction of the previously defeated Greens’ private members bill to Parliament. For this action to have the best chance of success, we need maximum participation from the community, and need to make sure everybody is on board with this protest action to bring everybody along. As agreed at the previous strategic meeting, a follow-up meeting is planned on the north-side of the river in February 2023, where The Greens will seek to consolidate agreement around this action.

Sign up on this page to stay informed about this next meeting, keep up to date about our plans for this community action, and how you can help contribute and make it a success.

My actions on this campaign

I’ve been fighting for residents on this issue for a long time. Here’s a recap on some of the major actions the Greens and I have taken so far: